The New World Order, aka Global Reset
by Susan Mouw

A One World government is not a new concept. In fact, several over the years have attempted it. Let’s look at a “rogue’s gallery”, if you will, of just a few.

So history shows us that the dream of total world domination is not a new dream, or nightmare, depending on your viewpoint. And the Bible tells us it is going to happen again. But this time, it will be more successful, though for only a short time, than any of those five men we just listed would have ever been able to accomplish.

Revelation 13:1-2 tells us, “1 And I stood upon the sand of the sea, and saw a beast rise up out of the sea, having seven heads and ten horns, and upon his horns ten crowns, and upon his heads the name of blasphemy. 2 And the beast which I saw was like unto a leopard, and his feet were as the feet of a bear, and his mouth as the mouth of a lion: and the dragon gave him his power, and his seat, and great authority.” (Rev 13:1-2, KJV) The dragon that gives this beast his power, who we know as the Anti-Christ, is none other than old Beelzebub himself, Satan.

“7 And it was given unto him to make war with the saints, and to overcome them: and power was given him over all kindreds, and tongues, and nations.” (Rev 13:7, KJV)

All kindreds, all tongues, and all nations. So this beast, the Anti-Christ, is given total dominion over the world – a One World Government. It doesn’t happen overnight, of course. In fact, the Anti-Christ does not reach the apex of his power until midway through the Tribulation, after he survives a fatal head wound and then proclaims himself god, in the Temple in Jerusalem, an event known as the Abomination of Desolation.

We don’t know who the Anti-Christ is, or will be, and we won’t know until the Restrainer is taken away. It is my belief that whoever he is, he is alive and well today.

As we will see, the plans for this have been in place for a very long time and we can see some of the effects of that grab for power even now.

Somewhere along the line that translated, for many of the leaders of that organization, to a one world government, or “New World Order”. In 2015, the UN published a document titled, “TRANSFORMING OUR WORLD: THE 2030 AGENDA FOR SUSTAINABLE DEVELOPMENT.” 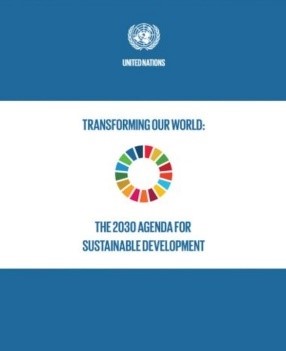 Even prior to that, in 1992 at a conference in Venezuela, the UN proposed "Agenda-21". It referred to something called "Sustainable Development" and seemed to be concerned with protecting the planet by limiting and controlling the development of corporate and personal structures. President George H.W. Bush publicly gave it his support and the Agenda was accepted and adopted by 178 nations. I should also mention that President Obama and Pope Francis both gave their support to that document and they were not alone.

So what is this Agenda 21? Well, if you just google it, you will see these descriptions that sound very positive and humane, and most of these descriptions will be sure to include the phrase, “a non-binding agreement.” However, when you start to dig a little deeper, it is not so innocent or humane. Part of the stated goal of this agenda is a one world government by 2030 and a depopulation of the earth by 95%. It also calls for government ownership of all land, since individuals cannot seem to make the right decisions about their own lands, according to the authors and supporters of this Agenda. As of 2017, there were 600 US cities that had signed onto this agenda and its goals. Our current administration under President Biden also supports this agreement. In fact, this fiasco we’ve recently seen in Afghanistan, with the money poured into the coffers of terrorist organizations, the millions of dollars of US weaponry and equipment left behind, and other things we see today that leave us shaking our heads, may not be so much an “Oops” as a well carried out agenda that has been planned for some time.

Which begs the question, “Where is the United States during the Tribulation?”

Before I try to answer that question, let me just say I am a Patriot, and a veteran of the US Army. I believe this country was founded on Judeo-Christian principles and has been blessed by God through the years. But with the removal of prayer from our schools, the bias against Christians, the shutting down of churches, the support for sinful ways, such as abortion, we have turned away from God and are, even now, facing His wrath.

The United States of America, once a predominantly Christian nation, is no longer so, and we have fallen from our position as the world’s superpower. Our allies have learned, especially with what happened in Afghanistan, that we can no longer be relied upon to keep our promises. Our enemies sense the weakness that surrounds our country and are making their plans accordingly. We know that Iran is weeks, if not days, away from military-grade uranium. In fact, Amir Tsarfati, in a recent broadcast stated Iran now has military grade uranium and the question is “will they use it?” We know North Korea has re-activated their nuclear test sites. We’ve read about the new global missiles developed by China which can be launched on one side of the world, circumnavigate the glove, and hit a target on the other side of the world. We know that Russia has come to agreements with most of the Middle East – those countries that surround Israel – and is, even now, positioning troops and resources all around Israel. Israel now stands alone, and she knows she cannot count on the US.

Remember that verse we read earlier?

“7 And it was given unto him to make war with the saints, and to overcome them: and power was given him over all kindreds, and tongues, and nations.” (Rev 13:7, KJV)

Well, all kindreds, and tongues, and nations would seem to include this great country of ours, as well. So, the United States of America, as we have known it, will not be part of the Tribulation. This country, or what is left of it by that time, will just be another part of that world over which the Anti-Christ will have total dominion.

I don’t know how close we actually are to these events occurring and the prophecies being fulfilled and I don’t dare to try to make a prediction. Jesus said, “Only the Father in Heaven knows” and I will put my trust in Him. I do believe we are close – very close.

If I understand the Rabbinical calendar from Israel, the first of the Jewish Fall feasts, Rosh Hashana, occurred the week of September 8-9, 2021 and was followed, 10 days later, by the Most Holy of Days for the Jewish people, Yom Kippur – the Day of Atonement. Finally, the last of the fall feasts – the Feast of Sukkot, followed shortly. We are entering a time of change, of trial, and for those of us who believe and have put our trust in Jesus Christ, a time of persecution. It is, truly, just the “beginning of sorrows.”

“And when these things begin to come to pass, then look up, and lift up your heads; for your redemption draweth nigh.” (Luke 21:28, KJV)